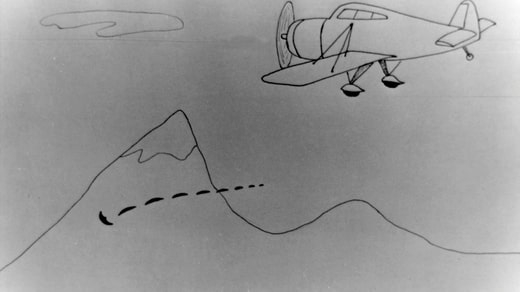 The afternoon was sunny and clear when private pilot Kenneth Arnold took off from Chehalis for Yakima in the state of Washington in the northwestern United States. It was June 24, 1947 and Arnold, who was self-employed and owner of a company that sold fire extinguishers, had decided to search for a military transport plane that had disappeared somewhere among the inaccessible Cascade Mountains. A reward of $ 5,000 attracted.

After just over an hour fruitless search in the area south of Seattle, a “very strong flash of light” drew his attention to a series of strange objects not far from Mount Snowier’s snow-capped peak. It was just before 3 pm and Arnold was then at an altitude of 2,800 meters. At first he had a hard time spotting the objects and only saw a lone DC-4 that could hardly have caused the glare. But soon Arnold’s eyes were fixed on nine unusual aircraft that seemed to lack both a tail rudder and a cockpit. The objects flew in a straight formation several kilometers away from him.

In his report to the US Air Force, Arnold later wrote:

“What bothered me was that when I saw them twisting and shining in the sun while they were moving in their path, I could not detect any tail on them. /…/ The more I looked at them, the more excited I became because I am used to observing flying objects regardless of whether I am at high or low altitude. I could see how the objects, like on a string, passed another snow-capped mountain peak between Mt. Rainier and Mt. Adams, and when the first of the objects passed the southern peak, the last flew in front of the northern. “

Arnold could not understand what it was he saw. His first thought was that it could be secret military aircraft or some form of missile. The drawings that accompanied his report show a loosely drawn fuselage, oblong but flattened without any details, more like a thick boomerang than a saucer.

The interest in Kenneth Arnold’s story became enormous. Reporters from newspapers and radio stations interviewed him, and through the news agencies, the entire United States soon knew what had happened.

At one of the interviews Arnold described the movements of the objects as “a saucer thrown over water”; they seemed to bounce up and down against the air layer like when throwing a sandwich with a rock.

After all, it was not Kenneth Arnold himself who coined the term flying saucer. In his report to the US Air Force, he described the objects as “saucer like”, saucer-like, but the report was written on July 12, 18 days after the incident itself and Arnold had then been affected by the many articles that flooded the newspapers in the weeks after the incident. He also began to become more and more of the perception that what he saw were not military aircraft but visitors from space.

So even if Arnold himself was not consistent in his description of the objects, the press found it all the easier to decide. As early as June 25, the term flying saucer was used by a young reporter named Bill Bequette in an article in the East Oregonian – but Bequette was far from alone.

The term came to be used by many headline makers around the United States in the next few days.

The flying saucers held to become a well-known concept to the general public – no matter what Arnold had actually seen. In one fell swoop, it also became legitimate to write about mysterious objects in the sky – and to report them. Headlines about “flying saucers” or “flying discs” were common in the years after Arnold’s observation and the term came to be copied by media all over the world.

It was also imported very quickly in Sweden, although in the late 1940s people preferred to write about “flying torpedoes”, “light phenomena” and “projectiles” when it came to mysterious objects in the sky. In that case, the Swedes were well prepared. A wave of observations in 1946 had filled the pages of the newspapers for several months and it went so far that the military appointed a secret commission under Colonel Bengt Jacobsson to investigate over 1,000 reports of so-called ghost rockets.

When the saucers arrived, it was just a variation on an already familiar theme. Slowly but surely, the new name crept into the Swedish newspapers’ news pages. A notice in Stockholms-Tidningen on July 9, 1947, had the headline “Landed ‘saucer’ found” and was about an alleged saucer crash near Roswell in New Mexico. An event that later became the most famous of all saucer reports. On July 12, Expressen stated “that the first small barrel has already been reported over Stockholm” the day before.

Pretty soon after Arnolds report, the term flying saucer came to stand for something more than just the form of an unknown phenomenon. Virtually everything that flew in the sky and could not be identified at first glance was given that designation. A notice from Aftonbladet on 22 January 1949 is an illustrative example: “A ‘flying saucer’ has been observed over Trelleborg. It went off like a bright shining rocket over the dark morning sky. The speed was not greater than a normal aircraft so several people had plenty of time to observe the phenomenon. It left a hissing sound behind. “

Or as in this telegram from TT / Reuters which was published in several newspapers on December 1, 1950:

“The crew of an American traffic plane has told us that their plane was subjected to a ‘fall bomb attack’ on Tuesday by a flaming fireball at an altitude of 4,000 meters. The incident occurred while the plane was en route over British Guiana. The crew says that a very greenish fireball or lightning appeared from an altitude of about 6,000 meters. It did not look like a meteor, but rather corresponded to the descriptions of flying saucers that American aviation collected during its investigation last year. “

For the American film industry saucers became a new way to intimidate cinema-goers. The first time the term was used in a film title was in 1949 when the film “The Flying Saucer” premiered.

In the film directed by Mikel Conrad, the flying saucers came from Russia and the threat from communism was clear. More space-inspired were “The say the Earth stood still” from 1951 and “Earth vs. the flying saucers ”from 1956 with classic saucers visiting the earth.

Many of the films had their roots in the science fiction magazines of the 1930s and 1940s, where the saucers, without being called it, regularly adorned the covers of magazines such as Wonder Stories Quarterly, Science Wonder Stories and not least Ray Palmer’s “Amazing Stories”. where the flying saucer tank was cultivated long before the term was invented.

During the 1950s came flying saucers in earnest to become synonymous with visitors from space. Through books such as Frank Scully’s “Behind the flying saucers” (1950, in Swedish translation 1951) and Donald Keyhoe’s “The flying saucers are real” (1950), the idea came that the earth was visited by creatures in chrome-shining spaceships to gain a foothold. Scully, a writer and journalist living in California, claimed in his book that a flying saucer had crashed in Paradise Valley near Phoenix in Arizona and two more near the Aztec in New Mexico. On board the crashed ships, 34 dead crew members had been found.

But “Behind the flying saucers” was a scam. No saucer crashes had ever occurred. “Dr. Gee ”turned out to be a certain Leo A. GeBauer while another of Frank Scully’s sources, Silas Newton, was a previously punished scammer.

Although Frank Scully’s book was revealed as fiction as early as 1952, it sold 60,000 copies and contributed greatly to building one of the most popular myths – that the US government and military not only knew the “truth” about the flying saucers but also captured them. aliens and crashed vehicles hidden in secret rock chambers at Wright-Patterson Air Force Base in Dayton, Ohio. The story is still being cultivated and films like “Independence day” lean heavily towards it. It is no coincidence that Chris Carter chose the name Dana Scully as one of the agents in the extremely successful TV series Archive X and it is hardly a coincidence that many of the episodes deal with these very themes.

Today they have flying saucers replaced by the abbreviation UFO or as the US military now wants to call them, UAP – Unidentified aerial phenomena. The term UFO was coined in the early 50’s as an abbreviation, UFO, by the US Air Force as a designation for the objects and phenomena that despite an investigation could not find a natural explanation.

During the 1980s and 90s, the concept of UFO has become common in articles, radio and television and so on into the 2000s. Few authors today would dare to use the word flying saucer in the title of their books. The last time this happened in Sweden was in 1987, when Anders Dahl self-published “The Resurrection from the Saucer Sect”. The headlines of the newspapers have completely abandoned the expression. The slippage of concepts has resulted in many people today incorrectly equating UFOs with visitors from space.

The term was introduced by the US Air Force in the early 1950s as a way of describing the observations of phenomena, objects and vehicles that came to be investigated in a project called the Blue Book.

For some years now, the US military has been using the acronym UAP, unidentified aerial phenomena, to distance itself from the concept of UFO, which has increasingly been interpreted as an alien spacecraft – which it is not.

Nanaimo firefighters were able to rescue a dog that could have drowned in a drain...
Read more

Nanaimo firefighters were able to rescue a dog that could have drowned in a drain...
Read more
Sports

The new Comanchero boss has been hit with a serious crime prevention order that would see him banned from associating with any other...
Read more
Sports