In Arch. Olympia the sub. Of the Environment, George Amyras – “Olympia is the common homeland of all of us!” – PatrisNews 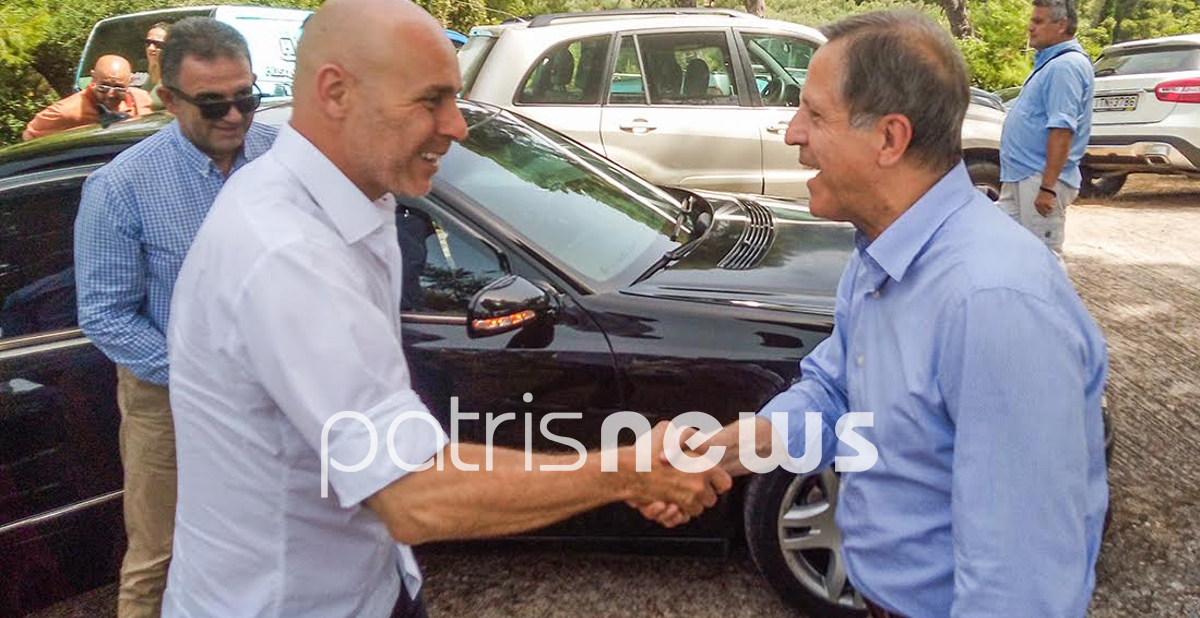 With the saying of Victor Hugo “the whole world has a common homeland, Ancient Olympia” the Deputy Minister of Environment Mr. George Amyras signed a memorandum of cooperation with Profitas Elias of Floka Ancient Olympia, a company with the company “Pantelis Papadopoulos Avapo” of Mrs. Alexandros Papadopoulos for the donation of forest material management equipment for the needs of fire protection of the area.

“What makes us feel safer is prevention,” said Amyras, adding: “We at the Ministry of Environment have stopped using the term climate change, we use the term climate crisis and if we do not all take action If we arrive we use the next term which is the climate collapse means that we will not have a return.

“First time in the chronicles…”

For the first time in the history of the Greek state we clean precautionary sensitive and critical forest ecosystems of the country. Today we are talking about dozens of garages and they clean in about 80 to 100 locations all over Greece 77,000 acres of forest, maintain 16,000 kilometers of forest roads and maintain or open about 1,600 kilometers of fire zones. “What we can do with funding from the 50m-euro Recovery Fund and another 20m from the state budget is an important first step.”

Concluding, Mr. Amyras stressed that everyone must take responsibility for the forest and the need to protect it, emphasizing that 96% of forest fires in Greece are due to human negligence.

“Helpers in this endeavor”

The Mayor of Ancient Olympia, Mr. George Georgiopoulos, who welcomed Mr. Amyras at the event, thanked him for the fruitful cooperation he has had with him for several months as part of the effort to restore the fire-affected area. He also thanked the company, emphasizing that Olympia with the timeless values ​​it represents and its symbolism in relation to world peace can inspire a great effort of cooperation of the peoples to deal with the climate crisis, as its effects can potentially lead to conflicts. and to strengthen peace.

“The Municipality and the other local bodies will be helpers and participants in this effort and in these four years we will be in cooperation with the Forest Service and the Region, our Municipality will help in whatever is requested”, stressed Mr. Georgiopoulos.

“The flame where it belongs”

The company Pantelis Papadopoulos, exclusive representative of Husqvarna for 60 years with a message with the message “Let us keep the flame where it belongs”, signed a Memorandum of Cooperation with the Forest Service of the Ministry of Energy & Environment, regarding the donation of technical equipment to foresters and foresters to support the work of forest fire protection and in particular the forest natural environment of Ancient Olympia.

The choice of Ancient Olympia, where the Memorandum was signed, was not only accidental. The universal symbolism of the monument and the sanctity of the space, make it a national and world capital. And since cultural capital is directly related to the natural environment, the company only dedicated to this purpose could be. 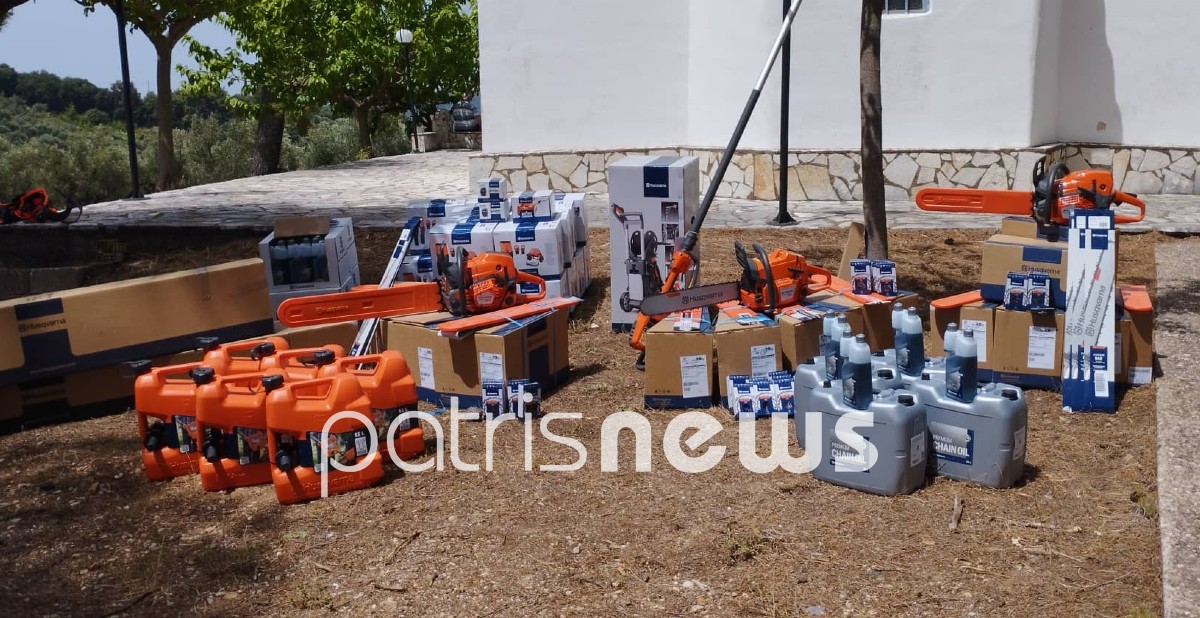 The natural environment belongs to the universal values ​​of Olympism, since the Athens Olympics 2004. The Olympic ideal expands, participates in the reflection of our century and calls man to a relationship of responsibility with nature. 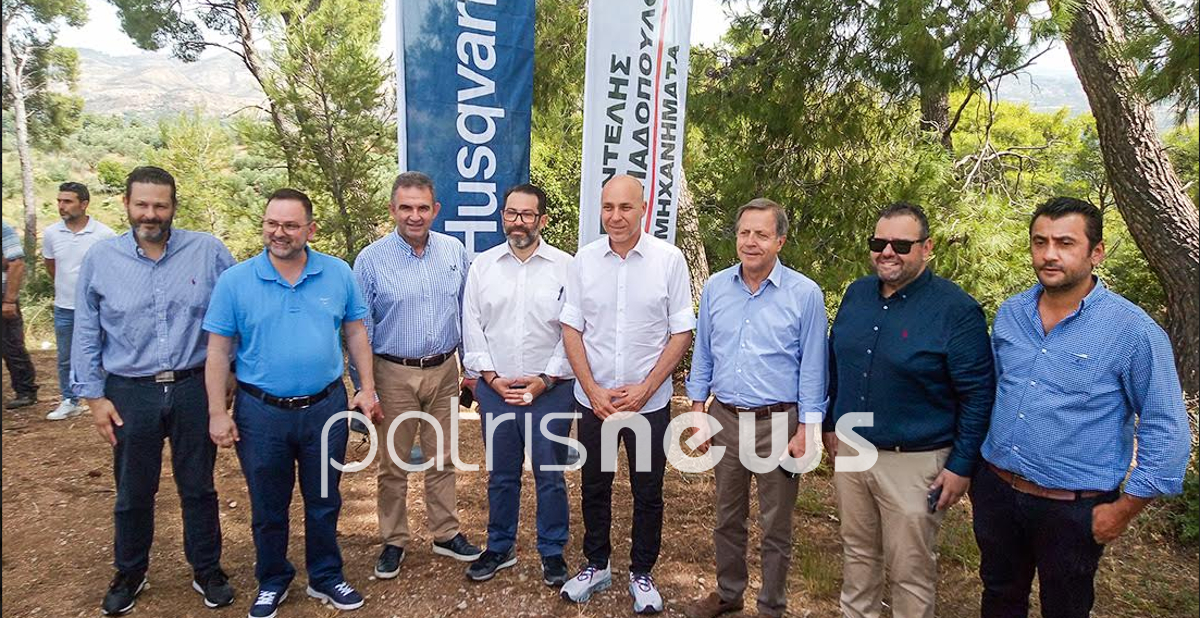 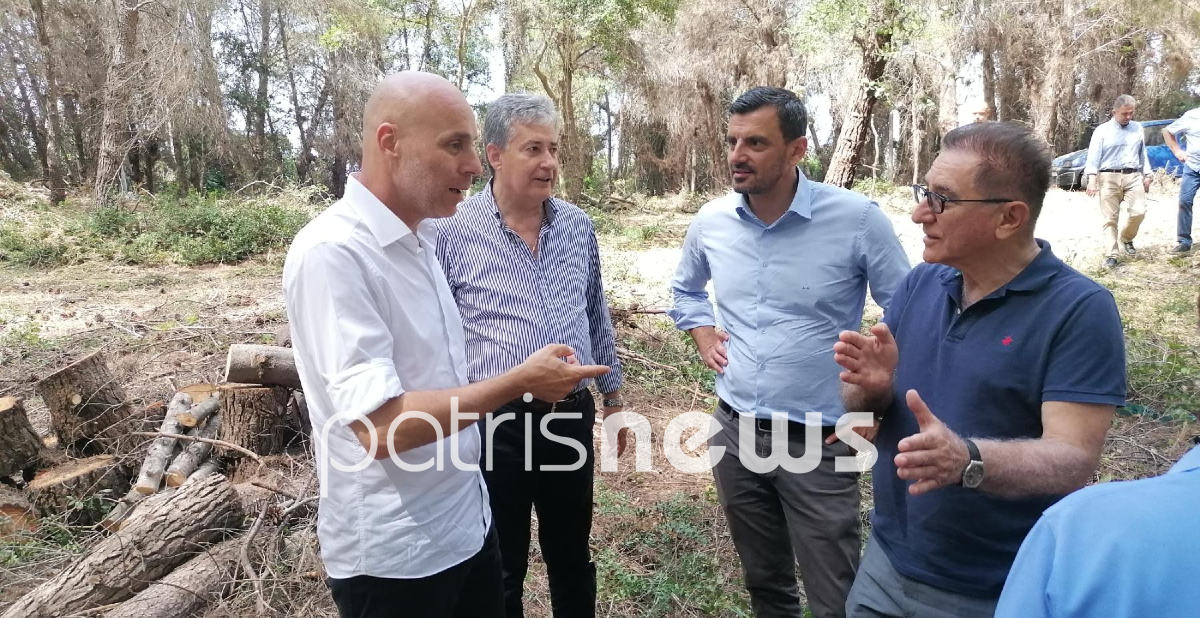 After the end of the event, Mr. Amyras visited Caiaphas, the forest of Strofilia and the forest of Bartholomew where he performed an on-site autopsy on the cleaning works.

“New invitation for cleaning on Monday!”

The news that next Monday is expected to come out a new invitation for cleaning gave yesterday speaking to ef. “Patris” the Deputy Minister of Environment George Amyras, on the sidelines of his visit to Olympia. Mr. Amyras added that because 96% of forest fires are due to negligence, citizens must also assume their responsibilities.

“On Monday, the second invitation comes out to do extensive cleaning because we are already doing cleaning. We live in a time of climate crisis, in a place where the arid landscape is vulnerable and sensitive. The issue is the prevention and the responsibility of everyone “, Mr. Amyras initially stressed, speaking to ef. “Patrice” and continued: 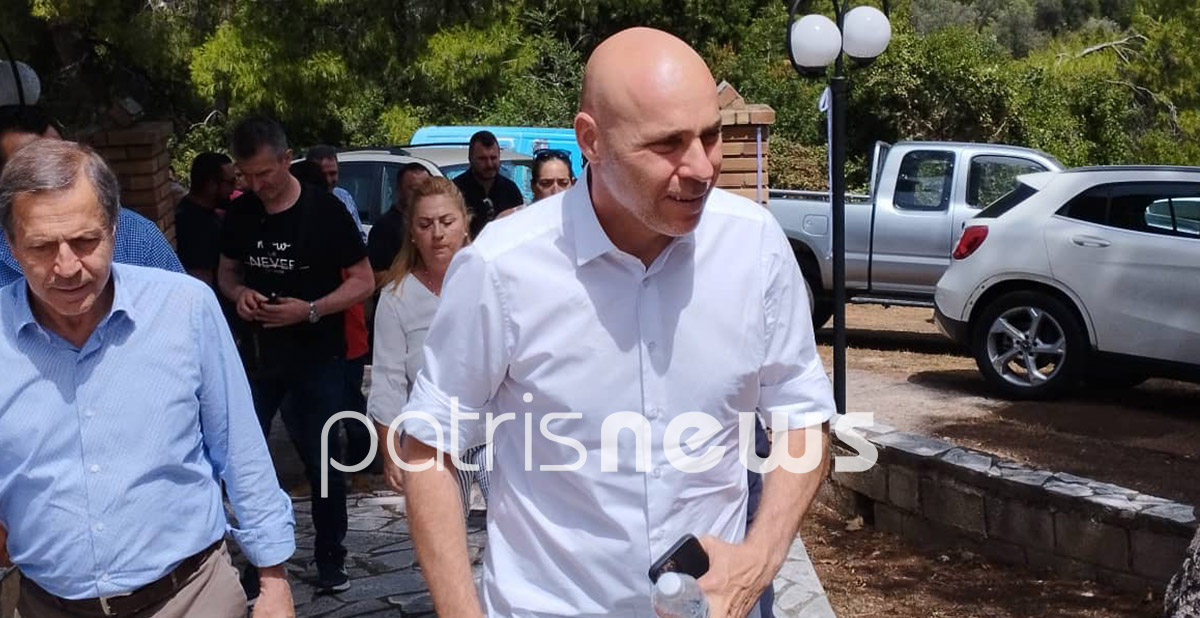 In the question, if the works that have been planned, will manage to become the sub. Environment replied that “of course they will manage to be done because they are already done! We are cleaning the archeological site, we are cleaning around 2.5 thousand acres in vulnerable and critical ecosystems of Olympia that the Civil Protection has indicated to us. The fight will never stop, we will clean all summer to have people as guards and extra protection! “

“The government’s attention is focused on Ilia”

“The entire government staff is focused on Ilia. It is very important to know that the State pays its attention, as do we MPs who are here. What is important and shows with the presence of Mr. Amyras is that there is cooperation between the public sector and the private initiative. To avoid such natural disasters, such as forest fires, we need everyone’s input. We need the contribution of active citizens, who must guard their neighborhoods and suburban forests together with the Forest Service and the Fire Brigade and be ready, while we also need the Local Government. And of course the companies play a very important role because through the funds they can “adopt” a forest area, to revive it and to protect it for the future “.

“The same mistakes must not be made”

“Ilia has been tested in the past. This time the same mistakes are not allowed. This time we are making the best possible preparation that has happened, not only by aerial means but also by clearing forests, by opening fire zones. Through the “Antinero” program, which is run by the Ministry of Environment, for the first time money is available in time to clean our forests and forest roads. “In combination with the air means that are more than ever and with the help of all citizens, we can withstand and deal with any threat.” 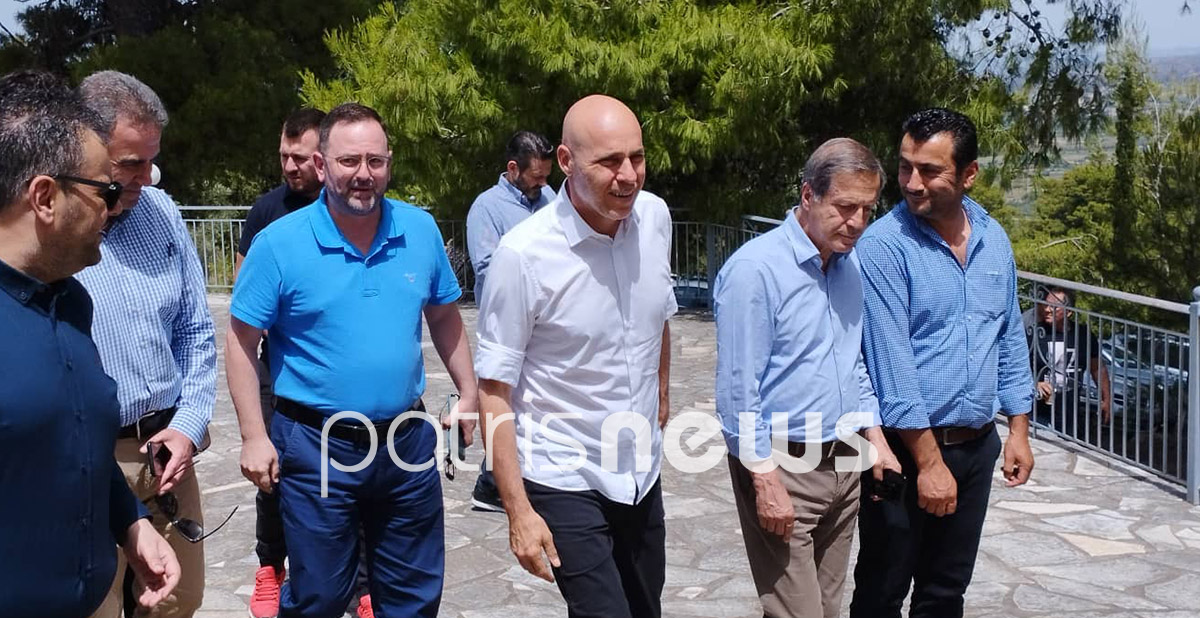 “We support actions that support our region”

“I came representing the Regional Governor, Nectarios Farmakis, to welcome the Minister to Ancient Olympia and to give many congratulations to the company of Mr. Papadopoulos who made this important donation to prevent disasters from fires or other natural causes. We support such actions, we are here and we give a lot of congratulations to all these people who support our region “.

“We must invest in prevention”

“We have to invest in prevention, because it is the only way to reduce the cost of extinguishing and the cost of damage. We are doing this with the presence of the Deputy Minister of Environment for Forest Affairs and the company “Papadopoulos”, which we thank for the donations he makes, and the forces of the forest cooperatives that worked quite satisfactorily, and we are particularly pleased with the flood and anti-corrosion projects. We hope to continue with the cleaning and removal works of the sub-vegetation of the forests of Ancient Olympia and the wider area, because our area and the crops have been irreparably affected by the three big fires in the last 25 years “. 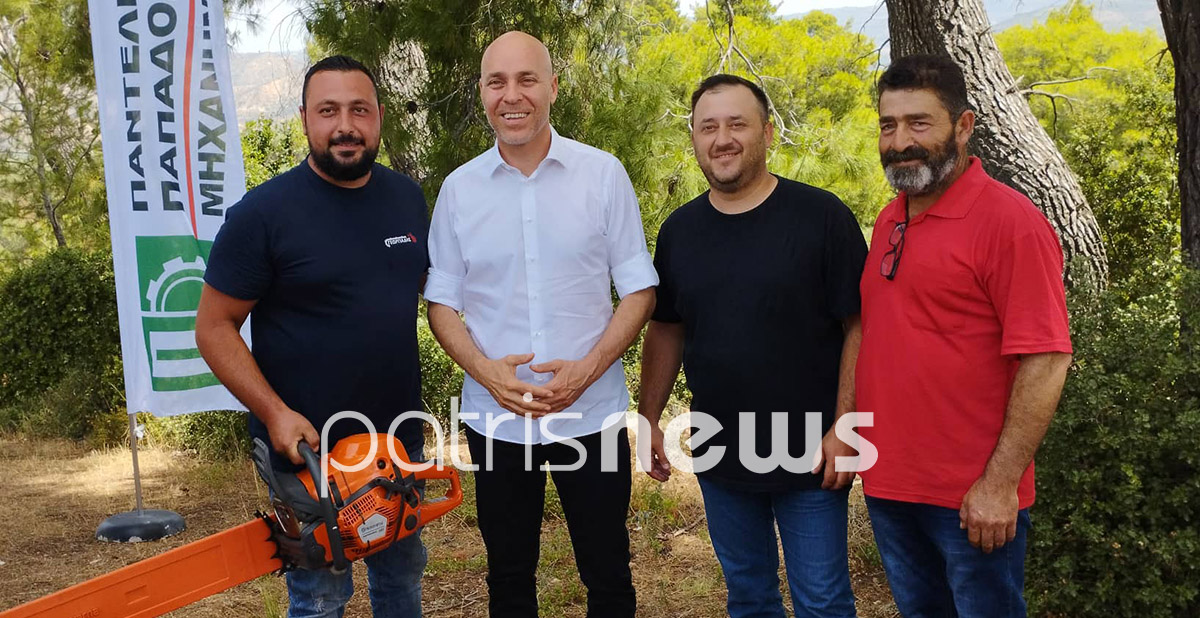 “We adopt the forest of Ancient Olympia”

“The company Pantelis Papadopoulos SA together with the leading company in the field of green care, Huqsvarna, we adopt the forest of Ancient Olympia. This will be achieved through the provision of state-of-the-art machinery and protective equipment and through continuous training of forest officials and foresters, ie the people who take care of the care and protection of forests. I warmly thank the Deputy Minister of Environment and Energy, George Amyras, for his prompt response to our request for support to the forest service and the people. Let us keep the “flame” where it belongs, in Ancient Olympia and away from our forests “.

What does Serena Williams’ future hold? What about Roger Federer’s? Will either return to top form?

On Monday, July 11, for the first time since 1997, Serena Williams and Roger Federer will both be unranked in the WTA and...
Read more
World

Do’s and don’ts when purchasing your concert ticket

The concept is simple: if you want to go to a concert or event, go to the organizer's website and buy a ticket...
Read more
Europe

What does Serena Williams’ future hold? What about Roger Federer’s? Will either return to top form?

On Monday, July 11, for the first time since 1997, Serena Williams and Roger Federer will both be unranked in the WTA and...
Read more
World

Do’s and don’ts when purchasing your concert ticket

The concept is simple: if you want to go to a concert or event, go to the organizer's website and buy a ticket...
Read more
Europe

A man fired at the door of his home in Montreal

A man was shot and wounded on the night of Saturday to...
Read more
French