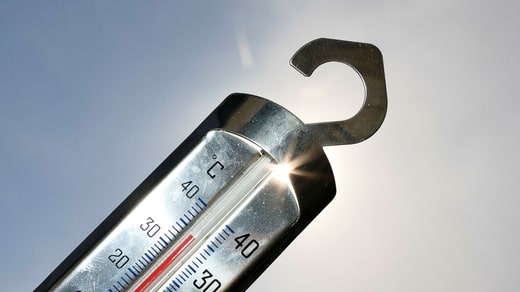 Summer, sun – and heat. Right now it’s unusually hot outside. The heat affects the body, but how dangerous is the heat really?

When the temperature creeps upwards, it is above all the heart’s pumping ability that is put to the test. When the body tries to get rid of the heat by transporting the blood to the superficial blood vessels, the heart is forced to pump at an ever faster rate, while the heat makes the blood more viscous.

The heat affects also the function of the kidneys. The kidneys are the organ in the body that controls the body temperature by ensuring that the fluid and salt balance in the body is as it should be. But the hotter it gets, the more water we have to drink, which means that the risk of dehydration increases as the temperature rises, which in turn increases the risk of kidney problems.

For young healthy people, this is normally not a problem. In the elderly, on the other hand, both heart and kidney function are generally worse, or in people with certain diseases. For these people, a heat wave can be directly life-threatening.

– It is completely unequivocal that heat waves kill lives. The effect is momentary and already on the first day with high temperatures, mortality increases, says Christofer Åström, researcher at the Department of Public Health and Clinical Medicine at Umeå University.

Facts. This is a heat wave

A heat wave requires five days with temperatures of at least 25.0 ° C. At least according to the Swedish Meteorological and Hydrological Institute (SMHI).

Pregnant women are also at risk to get hurt. In 2020, a major was published compilation in the British Medical Journal which showed a link between elevated temperatures and increased risk of premature babies, low birth weight and stillbirth.

But at what temperatures does the heat start to get dangerous? It is not as easy to determine.

In his research, Christofer Åström has worked together with the Swedish Public Health Agency and SMHI with the advice, recommendations and warnings that the authorities have produced in the event of heat waves. However, one difficulty has been in identifying the so-called threshold values, ie at what temperature, for example, a warning should go out. Not all risk comes at a certain temperature, and the risk is not zero if the thermometer shows a little less.

– For heat, unlike for example air pollution, there is also no baseline where we can say that the impact is zero. For air pollutants, it is when there are no pollutants at all, but what is the corresponding value for temperatures? We can not happily start from zero Kelvin (the absolute zero point, -273 degrees Celsius), says Christofer Åström.

In 2013 presented Christofer Åström and his colleagues a model that shows that if the highest temperature is 27 degrees Celsius three days in a row, then the mortality in the population increases by ten percent, compared to summer days whose highest temperature is around 20 degrees. At 30 degrees, the mortality rate is as much as 20 percent higher.

– It is quite a lot, but it is a relative increase in risk. So for a healthy teenager, the risk is negligible, because most people who die are older, says Christofer Åström.

With the heat wave in the summer of 2018, there was a unique opportunity to test the model. Not least considering that the summer before that had unusually few days when the temperature exceeded 23 degrees.

During the summer of 2018 about 700 more people died than usual in Sweden. But how many of the deaths were due to the heat, the Public Health Agency could not say in the report the agency issued in December of the same year.

What Christofer Åström and his colleagues did then was to start from 2017 and then scale up to the temperatures that prevailed in 2018, using the model.

– Then we ended up between 600 and 700 heat-related deaths. That is, very close to the observed mortality during the corresponding period. The heat may not explain all of these deaths, but many of them. We believe that, says Christofer Åström.

Those who die in heat waves, do they die unnecessarily, so to speak, or would they have died anyway, but only a little later?

– They die unnecessarily. For quite immediately after a heat wave, mortality goes back down to normal levels again. Otherwise, one would have expected it to be lower than normal, but it will not be. The majority had not died anyway. It was very clear during the heat wave in Europe in 2003 that claimed the lives of 70,000 people, of which 15,000 in France alone.

According to the model developed by Christofer Åström and his colleagues, mortality is already increasing at 21.7 degrees. Thereafter, it rises almost linearly by about 1.8 percent for each degree Celsius temperature increases.

However, there are those which means that cold winters harvest more lives than warm summers do. But according to Christofer Åström, science is far from agreeing on that point.

– There is a prominent British research group that firmly claims it. The problem with cold, however, is that the increased mortality comes later, only after between ten and twenty days with low temperatures. This makes it difficult to know if it’s just the cold or if it’s the cold and something else, like the flu, that is behind the increased mortality. In the case of heat waves, it is a much clearer connection that it is the heat and nothing else that is the cause, he says.

Facts. This is how you handle the heat best

According to researcher Christofer Åström, there are a number of tips for what you can do on hot days. The advice, he warns, however, is a bit of a “hello ax handle character”, because they may seem so obvious. The difficulty is to get the people who really need to take the advice. For example, you can keep in mind that:

● Turn off the heat

● Do not exert yourself physically

Warning for high temperatures: “Heat is dangerous for everyone”

More in a while… The article NATO summit: Biden urges Erdogan to maintain stability in Aegean published in NewsIT .
Read more

PSV acquisition Xavi Simons already a celebrity, but his football career really needs to get going