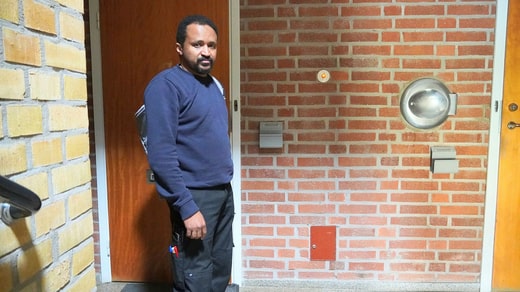 Spots of blood are still shining on the asphalt outside the rental property in central Falköping.

The woman’s car had been parked there – the car she fled to with one of the children to get protection, says one of the neighbors who witnessed.

It was 20.37 on Wednesday night when the police received an alarm about an ongoing riot. A woman is found seriously injured.

About an hour later, the doctors announced that the woman had died. “Crime in a relationship”, the police describe the incident, mention in particular that it is not a so-called honor crime and state that the suspect is not in the criminal record.

The deed in Falköping was the thirteenth fallt of lethal violence against a woman this year committed by a man with whom she had an affair. This can be compared with 14 such cases throughout last year.

A man in his 40s was arrested at lunchtime today by Skaraborg District Court on probable cause on suspicion of murder.

It’s the day before midsummer evening and in Fredriksberg Church, the municipality has opened a center for those who need to talk. The now dead woman was a municipal employee and crisis meetings have been held with her co-workers at the workplace.

What in the hours after the act was described as a messy situation where a large group of people got into a fight on the street, has now been revised by the police themselves. It turned out to be about neighbors who stopped up to see what happened and try to help after the woman was attacked in an apartment and then fled to try to escape.

18 minutes after the police received the alarm, the man was arrested on the street outside the home. At the same time, a policeman fired warning shots into the air.

The first patrol had met a man who came walking towards them with a knife in his hand. But it turned out to be the man, Hashim Abrar, who another neighbor of DN describes as the hero of the evening, despite the fatal outcome.

Hashim Abrar says that he had rushed out and then seen a man standing and chopping something against the woman who was then sitting in the driver’s seat of the car.

– I shouted “what are you doing?”. Then he threw the knife and I picked it up from the street and at the same time held him. After a while he had calmed down and took off his shirt, which was really bloody.

Hashim Abrar, who came to Falköping seven years ago from Eritrea and now works at a furniture factory, says that the police first thought he was the perpetrator because they saw him with a knife. He was handcuffed and placed in the police car before the mistake was investigated.

– You have to assess your own ability so it is difficult to express yourself in general. But it is a real backbone that acts here, when you see a serious crime. And in this case, the so-called one-way arrest worked.

While Hashim Abrar was holding the perpetrator while waiting for the police, another of the neighbors tried to save the woman.

– On the phone, the medical staff gave us instructions and we took a jacket to try to stop the bleeding, but when we took her out of the car she just collapsed, he says, who says that he thought the police and ambulance took a very long time.

But it is dismissed by Christer Fuxborg at the police in region West.

– The first patrol was given the assignment four minutes after the alarm began to be received and they were on site at 20.54 and then the ambulance was there. Remember that that was a weekday evening in Falköping with maybe two patrols on duty. I know it can be experienced as an eternity in a stressful situation. But there is nothing remarkable about this time of emergency as I see it.

When DN talks to Hashim Abrar is at home to quickly change clothes to go to the police station for an interrogation. The memory images are nothing but horrible. He who first thought that a completely different neighbor was knocking on the door for some everyday matter.

– I was wearing headphones when it started to live again and it felt like the whole apartment was shaking off something. Then came the screams, and when I opened the door and saw the girl standing there, I also saw the blood in the stairwell and realized that it … it was for real.

When DN leaves the house has passed 14 hours. The police cordon is gone. The cleaners that the property owner called there have carefully sprayed, rinsed and dried door by door, strip by strip, stone slab by stone slab.

A police patrol drives by, stops and says that the visit is a security-creating measure.

The only physical trace at the site that remains of the 2022nd murder of a woman in a relationship in 2022 is the police’s yellow and red “blocked off” sign taped to the apartment door.

In death, former Dolphin Marlin Briscoe gets history’s due, after years of neglect – Boston Herald

All through the years, right to his death of pneumonia, Marlin Briscoe was called, “The Quarterback,” by quarterback legend Joe Namath. They’d see each...
Read more
Hot News