the preponderant Assembly over the government? 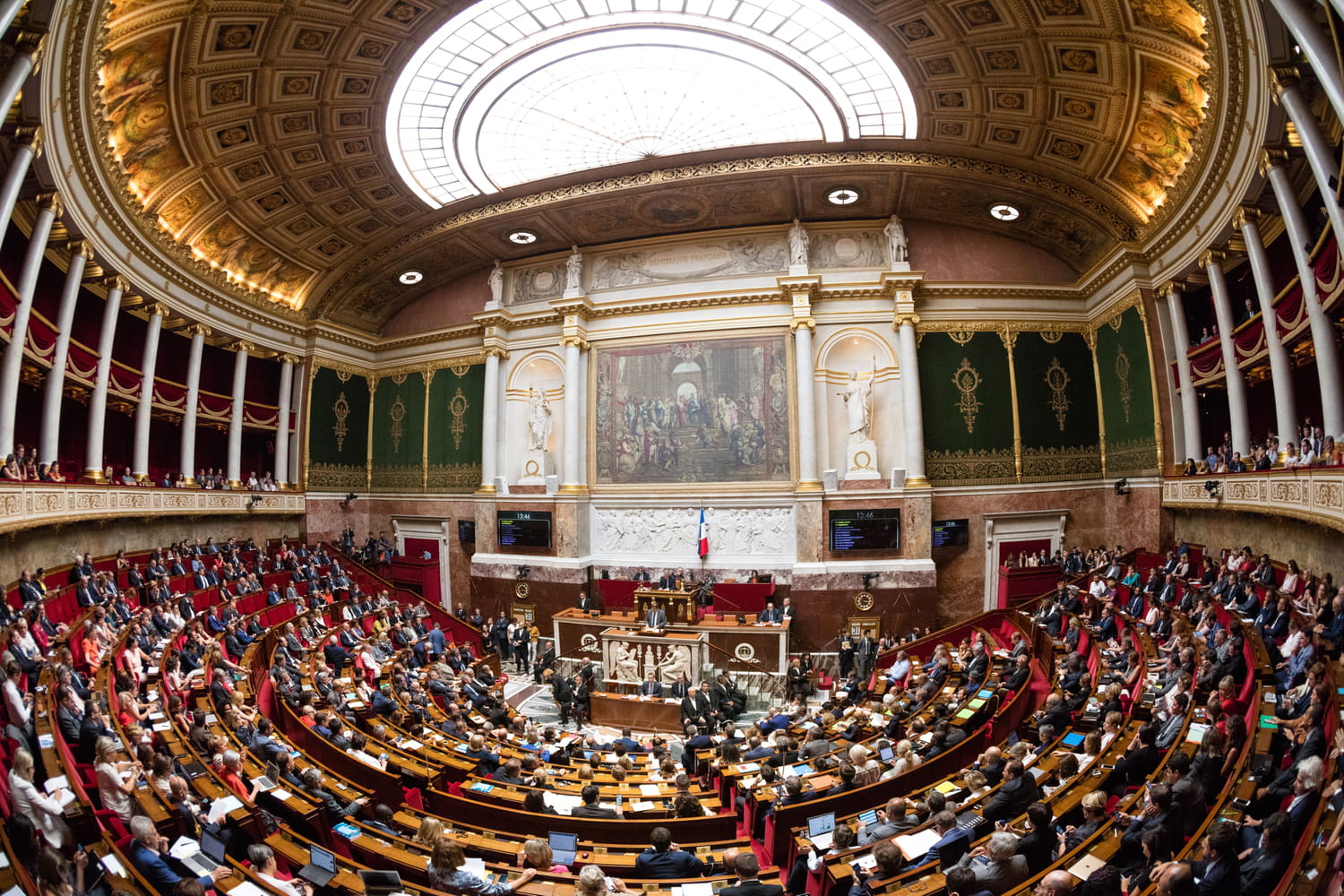 MOTION OF CENSURE AND 49.3. In the absence of an absolute majority in the Assembly, the government could brandish the weapon of 49.3 to force its laws through. But the motion of censure available to parliamentarians can overthrow the executive.

Its use was announced on the evening of legislative election results. Faced with the simple relative majority won by LREM and its allies in the National Assembly, it is impossible for part of the new parliamentary opposition to see Elisabeth Borne be maintained in her role as Prime Minister. If the left has failed to constrain Emmanuel Macron to choose Jean-Luc Mélenchon at Matignon because of the defeat of the Nupes in the legislative elections, she aspires to put an end to the functions of the head of government with the help of a parliamentary weapon: the motion of censure. A tool that can lead to the overthrow of the government.

From the announcement made by Eric Coquerel, deputy of Seine-Saint-Denis, Sunday, June 19, the reactions multiplied, on the left as on the right. And it must be said that the proposal of this representative of rebellious France is not unanimous. If he indicated that his political group (LFI) would file it on July 5 during the Prime Minister’s general policy speech, the campaign allies of Jean-Luc Mélenchon’s party are not on the same line.

Fabien Roussel, boss of the Communists – who has always held dissenting positions in relation to LFI and Nupes – indicated that he does not “understand[ait] not much why there is this motion of censure”, recalling that a vote of confidence in the government takes place after the speech of general policy. “If in the speech of general policy there is nothing for the purchasing power of the French, if there is still retirement at 65, all these measures that the French do not want to hear about, we will vote against. So there is no need for a motion of censure.” For his part, Olivier Faure, re-elected deputy and first secretary of the Socialist Party, declared that the motion of censure mentioned was “not a common position at this stage. “Finally, EELV has not spoken.

On the other side of the hemicycle, if neither LR nor the RN are in the odor of sanctity with the policy of Emmanuel Macron which Elisabeth Borne is responsible for implementing, no rallying to the motion of censure of LFI n is in the boxes. The historic right does not want to “go fricoter with the Insoumis” in the words of Aurélien Pradié, secretary general of LR, its president, Christian Jacob, having announced that no deputy of the group would give his confidence to the government. As for the National Rally, the question must be decided on Thursday.

In fact, the motion of censure of insubordinate France should not succeed. And, let’s say it right away, the government will not be overthrown. However, this means of pressure could be used regularly during the five-year term, due to the composition of theNational Assembly, by the various political forces. Especially if the government uses, for its part, article 49.3 of the Constitution to pass its laws.

What is a motion of censure?

The motion of censure has been a term at the heart of parliamentary news since the end of the legislative elections. Its objective: to lead, if it is adopted, to the resignation of the Prime Minister as well as of his government. The motion of censure can be spontaneous, directly tabled by deputies. They must be at least 58, or one tenth of the National Assembly. To be adopted, it must collect 289 votes “for”, that is to say the absolute majority of the hemicycle. In the event of a relative majority (a majority of “for” but less than 289), it is not adopted. The motion of censure can also be provoked by the government when it engages its responsibility when using article 49.3 (read below).

Can a motion of censure against the government succeed?

Since the establishment of the Fifth Republic, 58 “spontaneous” motions of censure have been tabled against 20 prime ministers. But only one was adopted, in 1962 (read below). Completing such a procedure is not easy. Indeed, it is a question, for the oppositions, of agreeing on the same text. An already difficult maneuver when they are commonly opposed on a text emanating from the majority, it becomes impossible when one of the main opposition parties is not hostile to the law in question. This is how the vast majority of motions of censure are ultimately not adopted.

In July 2018, Les Républicains, but also, with the same voice, the groups Nouvelle gauche, La France insoumise and Gauche democrat et republicaine had tabled a motion of censure against the government of Edouard Philippe after the revelations of the Benalla affair. . But LR had not voted for the motion of censure from the left, which had nevertheless supported that tabled by the right. Result: Neither was successful.

A motion of censure had almost succeeded in 1992, against the reform of the common agricultural policy. While François Mitterrand, the President of the Republic, only had a relative majority in the National Assembly, the RPR (ex-UMP and LR) and the centrist parties UDF and UDC had agreed to table a motion of censorship in order to oppose the project. The trio had also been joined by the Communist Party which had voted for the motion of censure, ultimately not adopted by three votes. 286 votes “for” had been collected against the 289 necessary.

Motion of censure: the example of 1962

The motion of censure was passed only once in the history of the Fifth Republic. It was in 1962. While General De Gaulle, then President of the Republic, announced his intention to implement direct universal suffrage in the presidential election. In the National Assembly, the Head of State only has a very relative majority (206 deputies). While the minimum number of votes required is 241, the motion of censure is signed by 280 deputies. Adopted, it leads to the resignation of Georges Pompidou, then Prime Minister… who will be reappointed by General De Gaulle. The latter has indeed refused the resignation of his Prime Minister. In response to the motion of censure, he decided to dissolve the National Assembly… And emerged strengthened by widening his majority to 233 deputies.

This situation of fragmentation of the Assembly and multiplication of opposition fronts leaves only a relative majority of 245 deputies to the deputies of Together!. What hinder the reforming impulses of the new government who will have to convince 44 deputies to sign his bills with him. If the method of dissolving the Assembly is rarely used, another solution exists. What is this article that the government could use to pass the most divisive texts? This is paragraph 3 of Article 49 of the Constitution, commonly called 49.3, appearing in Title V of the Constitution.

This legal device is used to regulate the “relationships between the government and the Parliament”. The Prime Minister is the person who can make use of it after deliberation by the Council of Ministers. It is then possible to suspend the examination of a particularly controversial bill within the National Assembly, and therefore of all the negotiations that accompany it, by engaging the responsibility of its government before the deputies (see below ). This would allow the presidential camp to pass a text subject to the commitment of its responsibility: in this, its advantages are multiple. On the one hand, it allows him to force the adoption of a text even if the Parliament is reluctant on this one. On the other hand, it makes it possible to speed up the legislative procedure, and in particular to put an end to any obstruction by parliamentarians. A solution of last resort therefore, but whose use is very supervised.

What does it mean to “engage the government’s responsibility”?

How can Emmanuel Macron use 49.3 today?

Since the constitutional reform of July 23, 2008 (promulgated in 2009), the use of this device is largely limited. Although it is still valid for all bills, it can only be used at the rate of one text per parliamentary session (i.e. an ordinary session – “an ordinary session begins on the first working day of October and takes end on the last working day of June” – either an extraordinary session or a full session), except for the finance or social security financing bill. Thus, if it has been used 87 times since 1959, it was mostly before this revision of the law since at the time, the government could use it as often as it wanted and on any text. . And today, with only 249 elected, the presidential camp is taking a big risk by using this text.

Personally, Emmanuel Macron has never made use of Article 49, paragraph 3 of the Constitution, both when he was François Hollande’s minister and since he became President of the Republic. Indeed, this procedure can only be initiated by the Prime Minister. However, during the first five-year term, this political tool has already been unsheathed. It was Edouard Philippe who, on February 29, 2020, had triggered it to put an end to the debates on the pension reform bill. Two motions of censure were then triggered, by the right and the left, both of which were ultimately rejected. The bill was suspended a few days later when the confinement was announced. Since then, the 49.3 procedure has not been initiated.

The statement ignited debate in the aftermath of Emmanuel Macron’s re-election. Asked about the guarantee of not having recourse to Article 49.3 of the Constitution to force through the pension reform carried out by the President of the Republic, Bruno Le Maire, Minister of the Economy, replied: “I cannot not give this guarantee. I do not wish it, that is certain. I have always said that this reform should be the subject of as much discussion and dialogue as possible with the hope of reaching a compromise.” The first sentence had not failed to react in the opposition. On a reform as inflammable as that of pensions, all the more so in the current parliamentary context, the use of 49.3 would be highly dangerous politically for Emmanuel Macron, whose government could face a motion of censure and significant social protest. . However, his desire for openness and discussions with the various forces of the National Assembly do not seem to go in the direction of using 49.3.

As it reveals The RepublicDutch market sirens sound for Kelvin Yeboah. In the last few hours, a Feyenoord poll has been received by...
Read more

As it reveals The RepublicDutch market sirens sound for Kelvin Yeboah. In the last few hours, a Feyenoord poll has been received by...
Read more
French