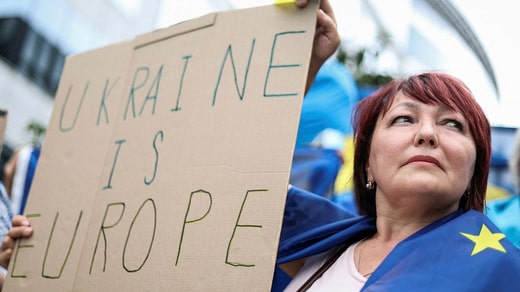 One of President Putin’s motives for attacking Ukraine was to stop the enlargement of the NATO defense alliance. It looks like it will be the other way around when Finland and Sweden become members, although it is currently unclear when this will happen.

Another geopolitical development that does not go Putin’s path either is that the European Union has managed to unite and quickly imposed sanctions on oligarchs, Russian politicians and officials, companies as well as on parts of Russian exports and imports.

Now, moreover, the EU is about to get bigger, when several former Soviet republics choose the EU path.

Immediately after the attack in Ukraine, Moldova, Georgia and Ukraine submitted their applications for membership. They further extend the gender of countries that want to fall under the EU umbrella: Albania, Montenegro, Northern Macedonia, Serbia and Turkey.

How the will is among the latter two is highly debatable. Negotiations with Turkey have been on hold for a long time. Serbia seems to be heading in the same direction. The country has not condemned the Russian invasion as it should, according to the EU. In addition, EU sanctions against Russia have not been introduced, as, for example, Albania and northern Macedonia have done.

There are close historical, political and religious ties between Russia and Serbia. In addition, there is growing opposition to joining the EU. According to a opinion poll As of April, only 35% of Serbs want to join the Union.

All the more urgent are other countries. Northern Macedonia even held a referendum last year to be able to change the name of the country. All to appease the Greeks, who have their region named Macedonia. When that obstacle was passed, it was instead Bulgaria that slowed down northern Macedonia, for historical and linguistic reasons. Northern Macedonia has had to wait a long time to start its membership negotiations.

As the EU handles Albania and northern Macedonia together, the Albanians have also been held to account. No wonder Albanian Prime Minister Edi Rama, with restrained anger, during a summit in Brussels on Thursday welcomed Ukraine with the addition: “I hope the Ukrainian people have no illusions.”

Among the EU countries that have been reluctant to admit new members, Putin’s attacks on Ukraine have sharpened the realization that if the EU does not welcome these countries, they may turn in another direction. China, for example, has been willing to lend money and invest in Serbia, Montenegro and more.

France is one of the countries which has long been doubtful. When President Emmanuel Macron and German Chancellor Olaf Scholz took the train to Kyiv and said they welcomed Ukraine into the EU, it was a turning point. After that, a number of EU countries changed their footing over Ukraine.

But the divisions that exist in today’s EU are not expected to decrease in the long run by another six to seven countries. For example, it will be difficult in the future to agree on further sanctions against Russia. With more members, it will be even more difficult to reach agreement on foreign and tax issues, areas where the EU must make unanimous decisions.

Not to mention how the EU budget must be strengthened if a number of relatively poor countries join.

The question is therefore whether the increased willingness to bring in new EU members is really translated into the ability to implement it.

Facts. Countries negotiating with the EU

2020: Albania and northern Macedonia got the go-ahead to start negotiating membership. Negotiations have not begun.

The European Commission wants to give Ukraine candidate status

Ukraine is fighting for its EU membership

Gynecologist from Brabant used his own seed to conceive donor children

The Brabant gynecologist Henk Ruis has fathered at least three donor children with his own sperm from women he treated between 1988 and...
Read more
Movies

Is it impossible to stay slim after menopause? This is how the doctor answers.

The reader walks 6-7 kilometers every day and eats a lot of vegetables, fish and chicken. Still, the weight goes the wrong way.
Read more

Gynecologist from Brabant used his own seed to conceive donor children

The Brabant gynecologist Henk Ruis has fathered at least three donor children with his own sperm from women he treated between 1988 and...
Read more
Movies

Is it impossible to stay slim after menopause? This is how the doctor answers.

The reader walks 6-7 kilometers every day and eats a lot of vegetables, fish and chicken. Still, the weight goes the wrong way.
Read more
French

Is it still true that blondes have more fun? That was the question asked by the ancient Clairol TV ad. And I am asking, not...
Read more
Load more
Facebook
Instagram
LinkedIn
Pinterest
Tumblr
Twitter