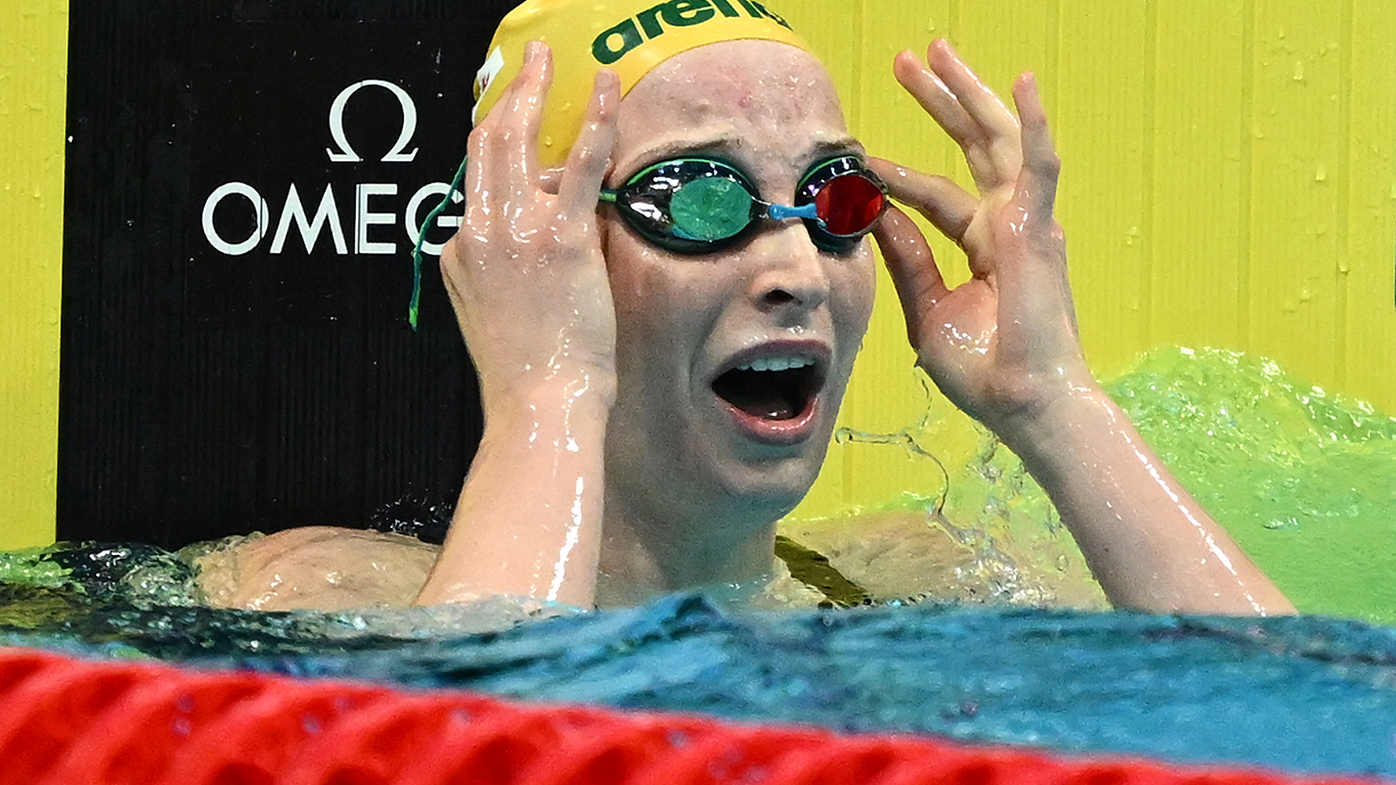 Australia has had its most successful day at this year’s World Swimming Championships, with Mollie O’Callaghan and Zac Stubblety-Cook both winning gold medals.

O’Callaghan, at just 18-years-old, had to overcome a pre-race drama when she cramped in her leg to claim the world title in the 100m freestyle, while Stubblety-Cook took out the 200m breaststroke.

O’Callaghan turned in sixth spot but powered home to claim her first individual world title, becoming the youngest winner of the 100m freestyle world title since American Nicole Haislett in 1991.

“It’s absolutely weird right now to think that I am a world champion,” she said.

“I was panicking a little in the warm up, I had a little cramp in my leg and I just felt a little out of it but I had teammates like Madi Wilson there and especially (coach) Dean (Boxall) supporting me which gave me the lift I needed for this race.

“I had to just trust myself and focus on my race, especially for my back end. I was just thinking I had to try and stick with the girls and execute Dean’s race plan as best I could and at the end of the day it was about experience, not necessarily time. Gaining that experience has been awesome this week.”

Stubblety-Cook now has the world title to go with his Olympic gold medal and world record in the 200m breaststroke.

His final 50m split of 31.98 was almost a second faster than the next best in the race.

“Coming off trials last month was a different mindset then what I had going into last year, as well as the different pressure,” he said.

“Tonight I just really wanted to go out and enjoy the race. The guys had me a little bit worried at the hundred but I always thought I could build through and see what happens in that last lap.

“At the end of the day I’m swimming freely and enjoying swimming which is the most important thing to me. I’ve never swum in this pool before this meet, or anywhere in Europe, so it was certainly a different experience but one I’ve enjoyed on the path to Paris.”

Elsewhere, Jenna Strauch, who is swimming at her first international meeting, claimed the silver in the 200m breaststroke, the first medal for Australia in a women’s breaststroke event since Leisel Jones in 2011.

“I was just hoping to make the Final and get all the experience I could so to walk away having stood on the podium has exceeded all my expectations.”

Australia also claimed silver in the men’s 4×200 freestyle relay, with the team of Elijah Winnington, Zac Incerti, Sam Short and Mack Horton overcome the disadvantage of swimming in lane eight to finish second.

Australia is second on the medal tally with four gold medals, seven silvers and one bronze.

For a daily dose of the best of the breaking news and exclusive content from Wide World of Sports, subscribe to our newsletter by clicking here!

The backstories and controversies that have ignited feuds involving athletes

Neymar is considering his options after deciding the time is right to leave Paris Saint-Germain -- ESPN's Insider Notebook has the latest. PLUS:...
Read more
French

Habemus signs. After yesterday's renewals, the Milan transfer market will kick off at the last second, which is not possible at the last...
Read more
Hot News

Neymar is considering his options after deciding the time is right to leave Paris Saint-Germain -- ESPN's Insider Notebook has the latest. PLUS:...
Read more
French

Habemus signs. After yesterday's renewals, the Milan transfer market will kick off at the last second, which is not possible at the last...
Read more
Hot News

As of Friday, several ferry routes in Norway will be free of charge. The government introduced a revised state budget for 2022 with an extra...
Read more
Europe