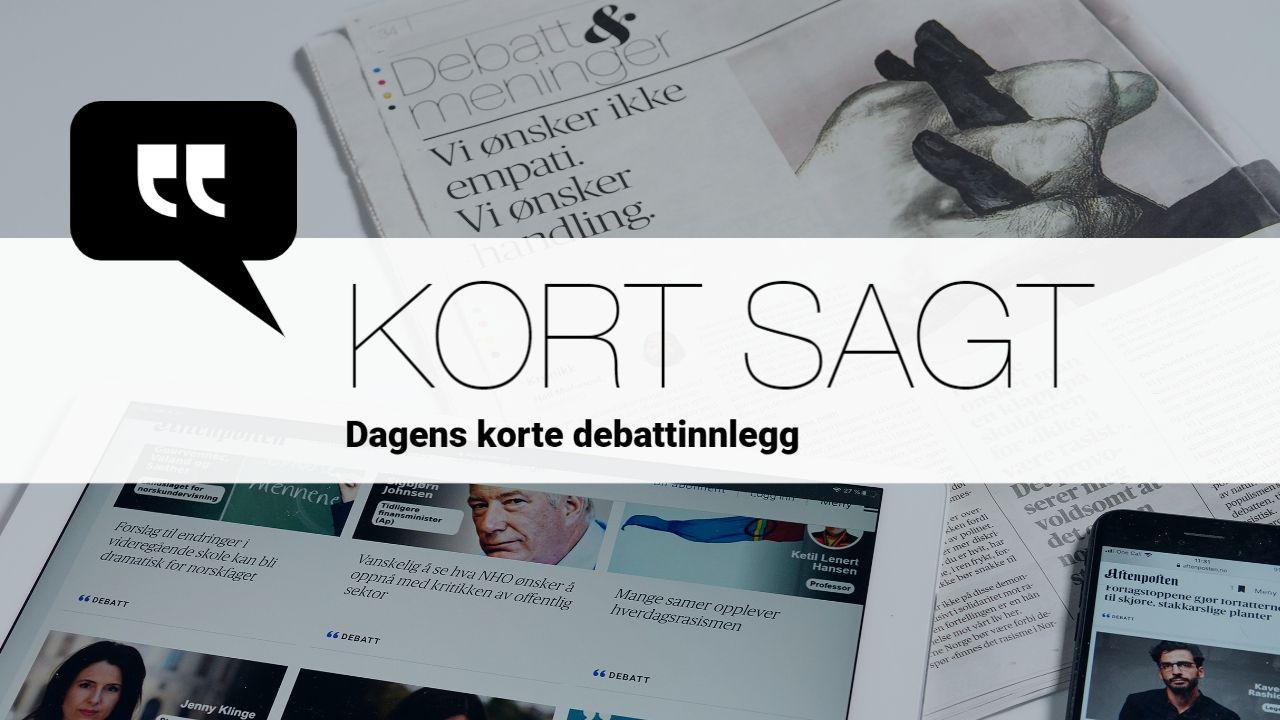 Kurdish struggle for independence. Statement by the Polish Embassy. This is today’s card post.

Debate
This is a debate post. Opinions in the text are at the writer’s expense.

The Kurdish faction – and Norway

Thanks to commentator Mina Hauge Nærland for the presentation of 100 years of Kurdish struggle for independence (Aftenposten 21 June). I would just like to add a few points that are relevant ahead of the NATO summit in Madrid on 29 June.

No Kurdish party is currently working to unite the divided Kurdistan into a new nation state. On various grounds, they work for the Kurds to have cultural, democratic and linguistic rights within Turkey, Iraq, Iran and Syria.

The work has come the furthest in Syria. In the northern and eastern part of the country, the Kurds have for almost ten years been at the forefront of a new, cross-cultural social order. All ethnic groups have the same right and duty to participate in the governance of society. The tenancy shall be divided between a woman and a man, both in political and administrative bodies. They should preferably be from different ethnic groups. One Kurdish and one Arab is common. There are about as many Kurds as Arabs in the area. Armenians, Turkmens, Assyrians and Churches also hold such positions. This has not yet been introduced everywhere.

The self-government, which controls nearly a third of Syria’s land, wants a peaceful, political solution with the government in Damascus. But since 2016, Turkey has carried out three invasions. Turkey has started replacing the population in the occupied territories: away with the Kurds. Syrians from other parts of the country will take over houses and land.

At the NATO summit, Prime Minister Jonas Gahr Støre (Labor Party) can say no to this Turkish policy or give tacit consent to Turkey’s expansion of the occupied territories.

Erling Folkvord, national board member of Solidarity with Kurdistan

A sound development of an irresponsible oil field?

Equinor says they are planning a sound development of the Oskar Wisting oil field far north in the Barents Sea. But is it justifiable to give permission for the development of an oil field that will produce oil long after the world will not have more climate emissions?

At the same time as the climate crisis is approaching, Equinor is continuing unabated with the development plans. This is done, knowing that it is the community that now takes a greater share of the financial risk than is normal.

The reason is the temporary oil tax package that was adopted in June 2020. This move made Wisting far more profitable. The state will eventually take approx. NOK 55-70 billion of the bill for the development of the field.

Equinor believes it will still be profitable for the state as well. But this presupposes that the world will not be able to implement the climate cuts that are necessary to reduce climate emissions. Is there something we want and a chance we want to take?

There are both economic and climatic reasons to be critical of the Wisting development. The environmental movement warns that they will push to stop this development, and we in SV will do the same.

Official statement from the Polish Embassy in Norway

The Embassy of the Republic of Poland in Oslo would like to make some comments on Nina Witoszek’s article “Can Poland be saved from autocracy?” published June 14 in Aftenposten.

Poland fully respects freedom of the press and the right to freedom of expression, which are among the fundamental rights of a democratically governed state governed by the rule of law.

We would therefore like to remind you that the coalition that now governs Poland, and which in this article was criticized and attributed authoritarian tendencies, has been elected in free and democratic elections twice, in 2015 and 2019. Thus, the majority of those who participated in elections, given the right to introduce reforms in various areas of Poland’s public life in line with what is set out in the coalition parties’ program.

We would also like to draw attention to the Polish Government’s implemented and unequivocal position from the very beginning of the Russian aggression against Ukraine. Defending international and humanitarian law – which is now constantly being violated by the Russian authorities and the Russian army – means not only that we defend Ukraine’s right to independence, territorial integrity, self-defense and self-determination, but also that we on all occasions and in all Forums strongly and consistently support Ukraine’s European hopes and opportunities.

Since the beginning of the conflict, the Polish border has been crossed by more than four million refugees from Ukraine, regardless of citizenship, nationality, gender, ethnicity, opinion or religion. Poland supports the Ukrainian state and Ukrainian society in all possible dimensions – not only politically, but also financially and militarily. Let me quote Georgette Mosbacher, the former US Ambassador to Poland, who recently stated: “Poland is the indisputable leader in supporting Ukraine ….. In fact, everything we Allies do happens in cooperation with Warsaw. Poland is the key to helping Ukraine. Poland deserves great gratitude for what the country has done and how it inspires others. “

Translated from English by Bjørg Hellum

Republican gubernatorial candidate Chris Doughty blasted his opponent Geoff Diehl for what he characterized as his refusal to participate in a televised debate ahead...
Read more