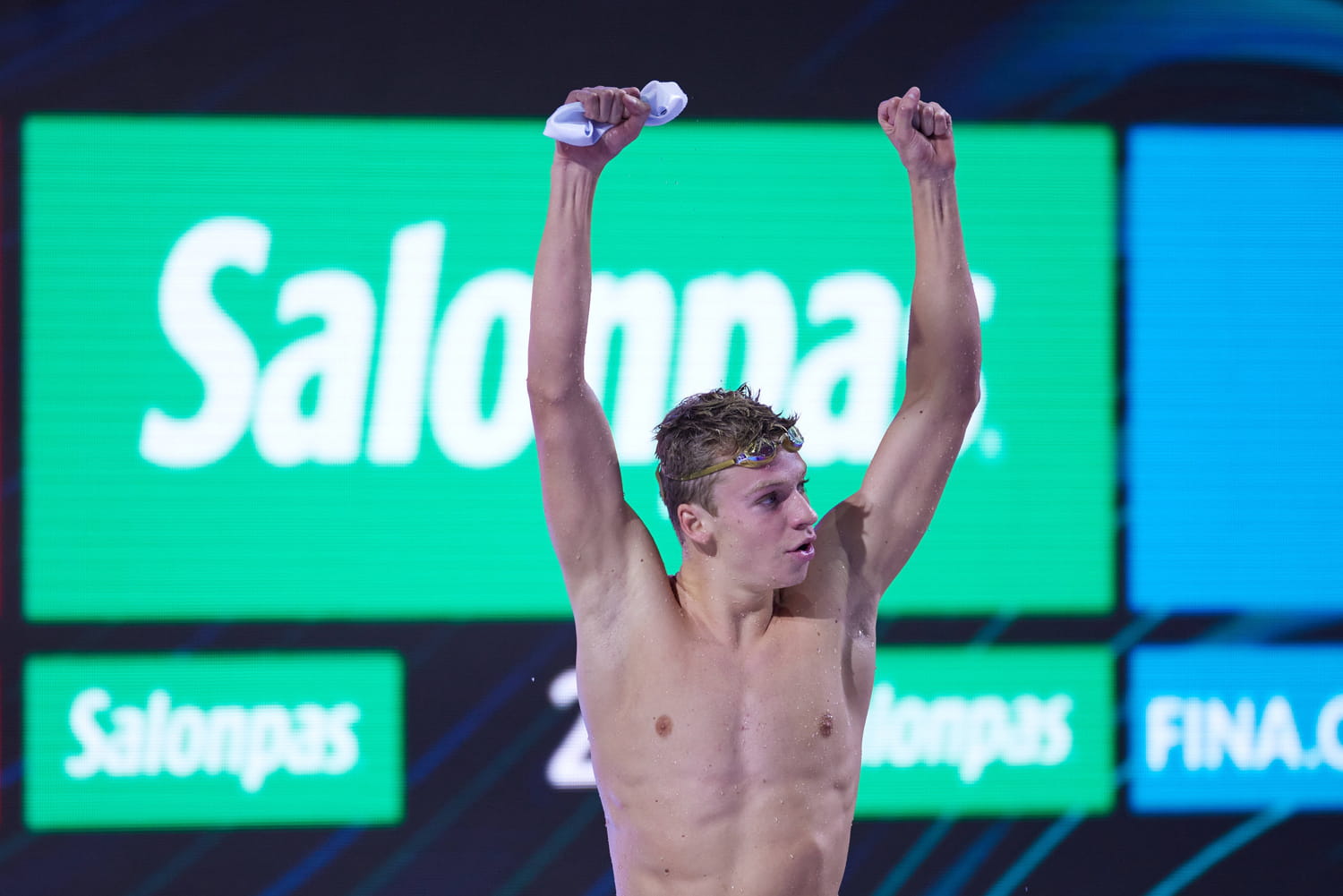 LEON MARCHAND. Once again crowned at these World Swimming Championships in Budapest, Léon Marchand is writing his own story and joining Michael Phelps and Ryan Lochte.

[Mis à jour le 23 juin 2022 à 13h00] There is no one like him and he is French! At only 20 years old, Léon Marchand is one of the stars of these World Swimming Championships in Budapest with three medals on the clock, two of which are gold. The native of Toulouse also entered the history of French swimming by being the first swimmer to obtain 3 medals during the same edition. “I don’t really know what to say, I don’t realize yet. I had less pressure because I was already world champion so in this race it was more fun and I think that when I think like that, it works so it’s pretty cool!” explained the swimmer in comments relayed by the FFN.

By winning the 400m medley and the 200m medley by smashing the French record several times, Léon Marchand proved that he was a complete swimmer and constantly progressing under the orders of Bob Bowman. At only 20 years old, he already joins two legends of world swimming, the Americans Michael Phelps and Ryan Lochte, the only two swimmers in history to complete the 200/400 double.

Who is Leon Marchand? Short biography

Léon Marchand was born on May 17, 2002 in Toulouse and is the son of two former swimmers: Xavier Marchand, silver medalist at the world championships in the 200m 4 swim in 1998, and Céline Bonnet, backstroker and medley specialist, who notably participated in the 1992 Olympic Games in Barcelona. His uncle, Christophe, is also a former Olympic swimmer, now sports director of a swimming pool in Clichy. The young “Léon” obviously bathed in the pools from a very young age, even if he had a preference for judo and rugby before embarking on the footsteps of his parents, until he was crowned French champion in the 200 m butterfly in Rennes in 2019 making him the first French swimmer to obtain such a coronation at 17 years old. A few months later, he won a bronze medal in the 400m medley and the 200m breaststroke at the 2019 European Junior Championships.

Who are Leon Marchand’s parents?

Léon Marchand comes from a line of swimmers. His mother is simply Céline Bonnet, back specialist and several times French champion. His father, Xavier Marchand, was vice-world champion in the 200m medley in Perth, Australia, in 1998.

How tall is Leon Marchand?

The French swimmer, specialist in the 400m medley, is a big size in the world of swimming and measures 1.83m according to the latest data from the FFN.

Why did Léon Marchand go to Arizona?

The day after the Tokyo Olympics in 2021 where he participated in his first Olympic final taking 6th place, Léon Marchand packed his bags to join the University of Arizona State and a certain Bob Bowman, former mentor of a certain Michael Phelps . Since then, the young prodigy continues to progress and impresses the United States. He made headlines in May 2022 when he broke the NCAA record for the 200-yard medley, previously held by Caeleb Dressel. A performance that was congratulated by … Michael Phelps on Instagram.

Beyond the results in the swimming pool, Léon Marchand has quite simply evolved since his departure for the United States as he explained to 20 minutes in June 2022. explosiveness. I am much more powerful. Mentally, I have gained autonomy and a lot of experience because I swam a lot in the NCAA (the university championship in the United States). I did a lot of races, a lot of relays. In competition, I now manage to throw myself on the wall to win the race. I swam a lot with Bob (Bowman). I improved in backstroke, in crawl. I have more assets than before. I just swim faster.”

Based in the USA, Léon Marchand is under the orders of the legendary Bob Bowman, former mentor of Michael Phelps and learns a lot from the latter. “I was very impressed at first. But he’s a really great coach, with a lot of experience. I know I’ll be ready for all competitions with him. And then he’s really relaxed. He’s had a lot of results , suddenly he is cooler, we have a lot of fun in training while knowing in which direction we are going, what we want to do. There is a connection that has been created between us.

Can the legend Michael Phelps be dethroned by the young Léon Marchand? Second best time in history on the 400m medley behind the American, Léon Marchand lost time on the butterfly, the backstroke and the freestyle, but stuck more than 3 seconds to Phelps on the breaststroke. The room for improvement therefore seems to be substantial for the Frenchman. For Jérémy Stravius, speed is not the key to beating this record. “It’s not about basic speed but background. Phelps swam 200 backstroke and 200 freestyle, it could also help Leon to do it in competition, to gain cash, experience, know the fatigue in these strokes, and then put everything in place on the 400 m 4 strokes.”

Léon Marchand at the Paris 2024 Olympics

The adaptations of video games in series or film never end. And as SEGA is satisfied with the success of Sonic on the big...
Read more
French

Milan, prices down for Diallo: the 20 million required for his card are too many

The prices of Abdou Diallo for Milan, with the Rossoneri not planning to invest a large amount for a new central defender. Diallo...
Read more

The adaptations of video games in series or film never end. And as SEGA is satisfied with the success of Sonic on the big...
Read more
French

Milan, prices down for Diallo: the 20 million required for his card are too many

The prices of Abdou Diallo for Milan, with the Rossoneri not planning to invest a large amount for a new central defender. Diallo...
Read more
Europe

The Black Flamingo by Dean Atta: Learning to fly in a poetically told tale of discovery

THE use of narrative verse in this novel filled with poetry and heart proves that it is possible, accessible and worthwhile introducing...
Read more
Europe