did the Presley family like the movie with Austin Butler? 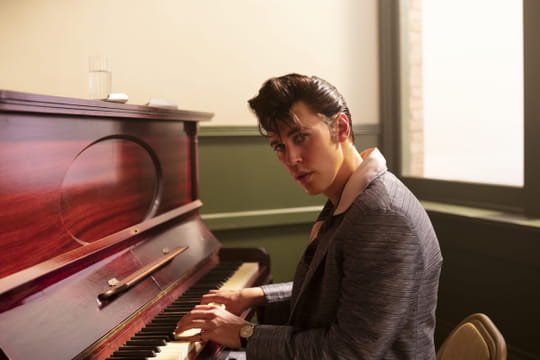 [Mis à jour le 23 juin 2022 à 10h16] The film Elvis is the latest biopic retracing the life of the King on the big screen. The feature film directed by Baz Luhrmann was released in cinemas in France on June 22, 2022. The director of Moulin Rouge! and Romeo + Juliet chose Austin Butler to embody the king of rock’n’roll, through his complex relationship with his manager, Colonel Parker (Tom Hanks). But what did the Presley family think of this new biopic?

The King’s granddaughter, Riley Keough, revealed to variety that she had seen the film with her mother, Lisa Marie, and her grandmother, Priscilla Presley. The one who became a director confided that she had cried while reliving the history of her family on the screen. “It was a very emotional experience,” she said, adding that there was no question of her family interfering in the artistic directions taken by Baz Luhrmann. “I’m honored to see that they’ve worked so hard to capture the essence [d’Elvis Presley]”. Lisa Marie Presley, the King’s daughter, for her part felt that Austin Butler should win an Oscar for his performance in the film.

The film Elvis has conquered international critics, if we are to believe the aggregator Rotten Tomatoes which rates Baz Lurhmann’s latest film with 83% of positive opinions. In France, Allociné lists a score of 3.8/5 for this biopic dedicated to Elvis Presley. For Première, it is even a “biopic of biopics“, while Télé Loisirs salutes the performance of Austin Butler, “bluffing in the role of the rocker”. “We had to dare this” “breathtaking” film, judges for his part Le Parisien, amazed by the reconstruction of the stage performances of the King offered in the film and by the “amazing performance” of Austin Butler.

To interpret the King in his film Elvis, Baz Luhrmann has chosen an actor who has already made his mark in the cinema but whose notoriety has not yet exploded. Austin Butler is 30 years old, and could be seen in the series “The Carrie Diaries” from 2013 to 2014. Subsequently, this actor held a few roles, notably that of Wil Ohmsford in “The Shannara Chronicles”. In the cinema, it is in “Once Upon a Time… in Hollywood” and in “The Dead don’t Die” that we can see him, even if he does not play a central role. His interpretation of Elvis in the biopic of Luhrmann promises to really reveal it to the general public.

But is it really Austin Butler that we hear singing in the movie Elvis? As incredible as it may seem, it is the actor who plays Presley that we hear throughout the part of the film which takes place before the 1960s, sometimes mixing his voice with that of the King. For the rest of the feature film, however, recordings of Elvis Presley were used by Baz Luhrmann’s team.

Synopsis- From his rise to fame, discover the life of Elvis Presley through his complicated relationship with his manager Tom Parker.

After the commercial: Bingolotto’s presenter – do you remember everyone? (0:39) Turn on sound After the success abroad, the program Naked Attraction hit like a bomb...
Read more
World