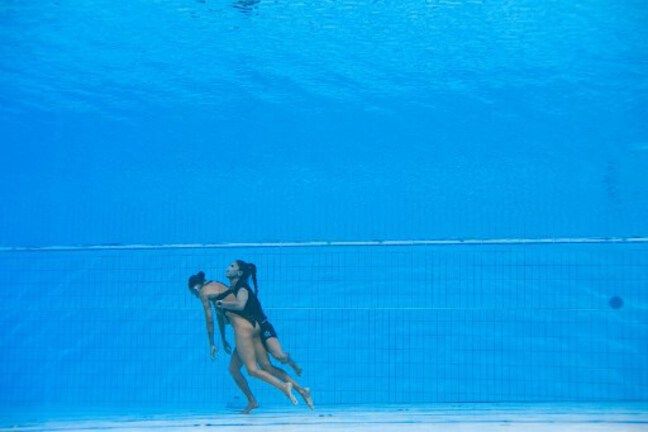 Magic then dread: American swimmer Anita Alvarez became unwell on Wednesday in the basin of the Alfred-Hajos complex in Budapest, a few moments after the end of her performance in the final of swimming synchronized solo free. Unconscious, she sank to the bottom of the pool.

Faced with the immobility of the “stunned” rescuers, Andrea Fuentes, a former swimmer and now a trainer, dived fully dressed. “I did the fastest apnea of ​​my life, more than when I was training for the Olympics “, told the quadruple Olympic medalist at the microphone of the Cadena Ser.

Using the strength of his arms, Fuentes brought Alvarez to the surface and tried to get her to breathe. A rescuer finally dived seconds after her. “I was scared because I saw that she was not breathing, but now she is fine,” reassured the Spaniard. “She only had water in her lungs, when she started breathing again, everything was fine.”

“The rules by which lifeguards can intervene are very strict, ”said Bela Merkely, head of the medical service for the championships, in a press release. In such a situation, only the judges of the International Federation can decide to interrupt the competition with a view to an intervention, but “no signal has been made to this effect”.

“After the coach jumped into the pool at her own risk, the local lifeguards, sensing the danger, no longer waited for the judge’s signal, but decided to intervene immediately,” added Bela Merkely. Once out of the pool, Alvarez “was immediately taken care of by a medical team” confirmed the International Swimming Federation.

“She went too far”

The American Artistic Swimming Federation spoke Thursday in a press release and spoke of a sports community “upset” by this incident. “Anita has been examined by medical staff and is still being monitored. She feels much better but is resting today,” the Federation said.

“The doctors checked his vital constants and everything is normal (…). Everything is fine, ”said his coach in an Instagram post. If the swimmer comes out unscathed, this kind of incident is not a first for her. “It happened once last year, during the Olympic qualifying tournament (…). Before that, she had had sporadic problems with fainting, but never in competition, ”clarified the Federation.

And for Fuentes, it’s once too many: “We were very scared, even if it’s not the first time it’s happened. She is an athlete who likes to seek her limits, but this time she went too far. I told him not to do it anymore. The continuation of the competition is therefore uncertain for Alvarez without the agreement of his doctors. There is only one event left for him: the team free final scheduled for Friday.