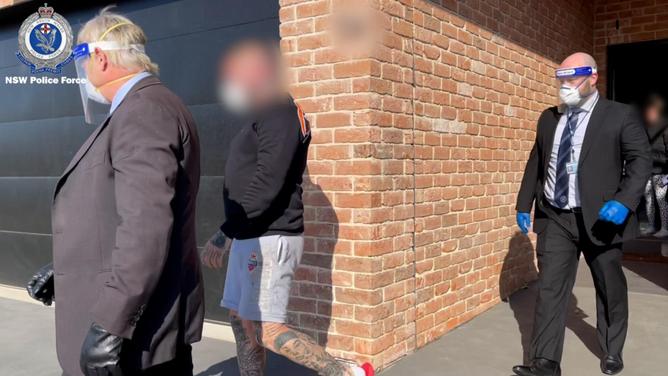 An alleged senior Comanchero bikie has been granted bail after he was arrested and charged in a major Operation Ironside drug bust last September.

These alleged offences also breached an intensive correction order he was under for two affrays that occurred in 2019.

But on Thursday, Mr Douet was granted bail by Justice David Davies in the NSW Supreme Court to attend drug rehabilitation at the Connect Global centre in Swan Bay.

This also included $50,000 in security from “two or more acceptable people” to ensure his attendance in court later on.

The original proposal of $30,000 in security from one family friend was deemed not high enough by the court, with Mr Douet’s lawyer Ertunc Ozen SC subsequently saying they could secure a larger amount if more people could be involved.

Justice Davies deemed that rehabilitation attendance and the $50,00 in security “significantly mitigated” his risk of reoffending and not showing up in court.

A major factor in Mr Douet’s case was a psychologist appointment he voluntary attended on May 24, 2021, which the court was also told lined up with when his involvement in the outlaw motorcycle gang (OMCG) ended.

Mr Ozen argued Mr Douet did not know his activities were being monitored by police on the encrypted platform AN0M when he attended, showing this help was not for “the purposes of the court” and “nothing was standing in his way to continue the lucrative behaviour, but it stopped”.

Judge Davies said this showed his desire to attend Connect Global was not “opportunistic”.

“Prior to knowing he was under police surveillance for his encryption activity he had recognised that he needed treatment and assistance for the problems he had,” he said.

“His desire to attend this rehabilitation centre is therefore not opportunistic on the fact that he has been arrested and charged.”

While it was only clear that Mr Douet had attended the one session, Judge Davies was prepared to infer from the evidence provided that there were more appointments.

The Crown prosecutor expressed concern over evidence provided in the police letters, which noted the primary operator at Connect Global had an enthusiasm for motorcycles.

While the operator is not a member of an OMCG and has never been charged with wrongdoing, there was a concern that an association with motorcycles could mean a risk of association with OMCG members.

The centre is also known to have OMCG groups in its facilities, though Judge Davies said it might not be “entirely surprising” that a drug rehabilitation centre would be used by people involved in the criminal underworld.

Mr Ozen suggested these were “shadowy” and “obliquely” assertions.

Justice Davies said he had come across Connect Global before in the bail list and had not heard similar evidence about it.

He also accepted that Mr Douet came from an “exceedingly deprived” background and upbringing that was likely “causally connected” to his drug-taking and involvement in the Comanchero.

Mr Douet appeared in court via video link and only spoke when Justice Davies handed down his decision.

He had previously applied for bail in March, but Justice Peter Hamill rejected it as there was no evidence of a bed or place at a rehabilitation centre.